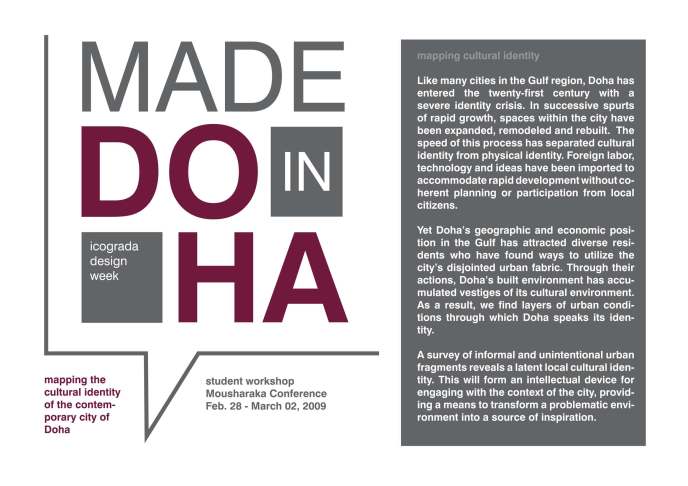 The Made in Doha workshop was conducted by urbanphenomena partner Reda Sejini at the Mousharaka | ICOGRADA Design Week in Qatar, which took place at Virginia Commonwealth University in Qatar at the bi-annual Tasmeem Doha Conference from 28 February to 5 March, 2009.

The following is a synopsis of the Workshop:

The architectural and urban language of the Arab Gulf region is still influenced by two main factors, climate and seasonal work force.

Imported building techniques led to a condition of negative context. This juxtaposition shaped the contemporary Arab Gulf city’s urban layout and its culture of chaos. The speed and lack of participation from local people meant that change came without context.

This architectural and urban chaos brought an alienated and detached borrowed memory with it. The modern Arab Gulf city does not remember her identity.

This complete lack of participation from local citizens in the architectural and urban affairs of the modern Arab Gulf resulted in a detached, hostile, and scarred Urbanity.

During the 70s Arab Gulf cities “suffered” from the so called “Oil boom” and the results of urban (un)planning. Most cities now are going through a severe identity crisis.

During this workshop participants will:

Survey and map the contemporary environment and context of the city of Doha. Through an observatory like activity, the aim is to detect, study, and analyze the visual urban phenomena occurring within the context of Doha. By using visually structured mapping techniques, the students will be able to read and discover an inert visual identity, peculiar to Doha’s given urban conditions. This will enable the students to record and document what constitutes the visual DNA of the Arab Gulf city identity, in general, and of Doha in particular. The students will have a better understanding of the local identity of the city, and, be able to devise or design identity specific projects or proposals for the city of Doha.

The result will be an alternative guide to the built form of Doha in booklet format. This guide is different than the typical architecture guides that survey single buildings by known architects. The Guide “Made in Doha” will look at the non-designed yet functional hybrids of the city’s current situation and the tiny structures that fill the gaps in the city’s fabric.

These types of urban phenomena should be unique to Doha, a product of its economics, multi-ethnic fabric and “Oil boom” conditions, perhaps chaotic as a whole in some parts, but not when viewed in the framework of the workshop.

These unusual places/occurrences are the by-products of different frenzied cycles of urban development. This undefined space has come into existence in the marginal realm between the different city systems, or it is immanent in the city system itself.

By attending the workshop, the students will be able to:

The method is highly interactive with the urban environment. A short initial briefing and discussion plus feedback shall take place in the classroom, presenting examples and the concept of cultural mapping. A map of the city of Doha will be distributed to each team, where different zones and sectors for surveying will be designated. Before heading to site, the students will prepare a draft format of the booklet pages, including the type of information provided.

After that, the students will break up into 2-3 groups, each covering a sector or zone of the city, and commence the visual survey using a digital camera & sketches.

Following that, the students will present their findings for discussion and make a brief explanation on why their examples have been chosen.

After this filtering process, the examples that most represent the city of Doha’s innate culture will be used to produce a small booklet as a cultural guide to the city. Plus a brief essay on why these aspects of Doha’s DNA make it “Doha”?

Sample from students’ findings and presentation