A Report from the first CITYSCAPE KSA Exhibition

The much anticipated Cityscape Saudi Arabia Real Estate Exhibition was held in Jeddah between June 14 -16, 2009, inaugurated by HRH Prince Misha’al bin Majed bin Abdulaziz Al-Saud, the Governor of Jeddah Province . This was the inaugural exhibition of the well-known annual Dubai event to be held in the Kingdom.

Running alongside the exhibition was The Saudi Arabian Real Estate Development and Investment Conference, which apart from several high profile keynote speakers, featured the announcement of the annual cityscape awards for real estate in Saudi Arabia.

Naturally, the event has garnered more attention following the recent surge of interest in the KSA market after the global financial turmoil, and its effects on neighboring Gulf cities. With mouthwatering levels of liquidity in the Kingdom at an all time high, belated attention has arrived to the shores of the Kingdom, after many years of what local professionals considered a delayed response to their earlier calls to hold the event in KSA.

Many Jeddah resident professionals and observers wondered why the organizers have chosen the second city of Jeddah, and not the capital Riyadh, as their first venue for holding the well respected and publicity attractive “Dubai fame” Real Estate event in Saudi Arabia. To some, holding the first Cityscape event in Saudi Arabia in Jeddah, was yet another unannounced point that Jeddah has scored in the contest to hold high profile events. The clout surrounding major events such as the Jeddah Economic Forum, only helps to emphasize the rivalry between Riyadh and Jeddah. However, according to the organizers, the date and timing of the event was just a logistic decision. Apparently an event in Riyadh was planned during May, but no venue was available until after Ramadan, hence plan B was to hold it in Jeddah. That is why one notices that this year Cityscape uses Saudi Arabia rather than naming a city, whereas, for next year’s event in 2010, it has been designated CityScape Jeddah.

As with other similar events in the Kingdom, attending from abroad was still a challenge, having to go through the unpredictable process of obtaining a visa for KSA. However, the Cityscape organizers have acted pragmatically and this time they have posted a warning on their website & brochures beforehand to forsake their responsibility. Literally announcing that if you have not yet obtained your KSA visa, “organisers of Cityscape Saudi Arabia are no longer able to provide assistance in processing visa applications”.

Even though-as expected- regional player Emaar exhibited their newly launched Hawadi development located in KAEC, many major companies were absent, especially the recent big players in the KSA market who have been strongly present in local media , i.e. Dar Al-Arkan, Rikaz and Al-Oula. Could it be that these companies no longer want to relate to glitzy events, and need now to focus on delivering what they have been exhibiting in previous years? One also noticed the large number of industry service providers, e.g. architecture offices, project management and other consultants. This has virtually rendered the event a project acquisition opportunity, more than a real estate event. 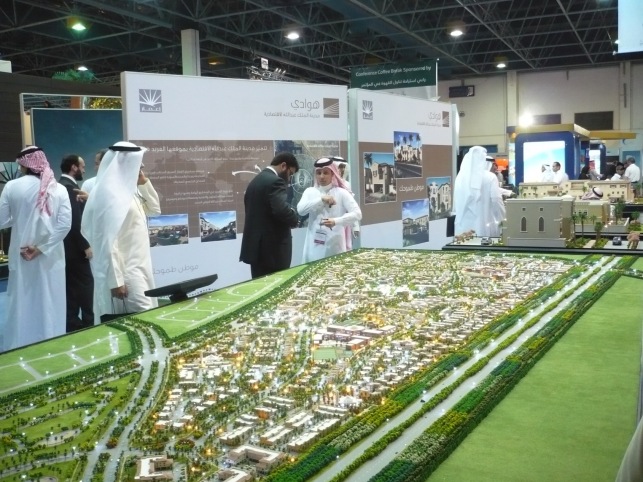 However, Many exhibitors noticed that in comparison to the Dubai event which they previously attended, they have noticed that there is not that relentless “shoving of Real Estate deals in your face” during the Jeddah event. Rather it was mainly a networking event, and chance for local professionals to exchange views with those visiting and hear their impression on the city in general, and on the larger economic outlook for KSA in relation to the construction industry.

Many Jeddah residents would like to confirm their own impression they have created of their city by asking newly arrived visitors, especially those in the building industry. What one international architecture office’s representative has confirmed, by saying that “… the city seems tired. It seems that it had its heyday, but has now lost track…”. A mixture of an inherent potential that hasn’t materialized yet and a determination to survive the outcome of years of neglect and urban deterioration.

In the absence of other forms of entertainment, the event was not just a professional networking event, but also a social one, with families and couples enjoying the stands as well as young enthusiasts of architecture & buildings. Even the local English newspapers referred to it as the “show” in their coverage.

But perhaps the best example that expressed the confused state of the city of Jeddah was the Saudi Disability initiative booth that was located at the Jeddah Chamber of Commerce and Industry (JCCI) stand. Obviously seeing an opportunity to advocate their cause during a well publicized event, their representative, Wajdi Wazzan informed me the of main reason why a socially oriented architecture initiative is present in a Real Estate exhibition. “We only approached the JCCI with our cause after years of contacting the Jeddah municipality- the proper government body to adopt our call to have all public buildings barrier free- ended with zero results. No one there had the time to listen to us. That is why we approached the JCCI and they kindly agreed to help us propagate the need to develop and enforce rules and regulations for public buildings to have the bare minimum in terms of ramps and accessibility facilities, which 95% of buildings in Jeddah simply do not have”. 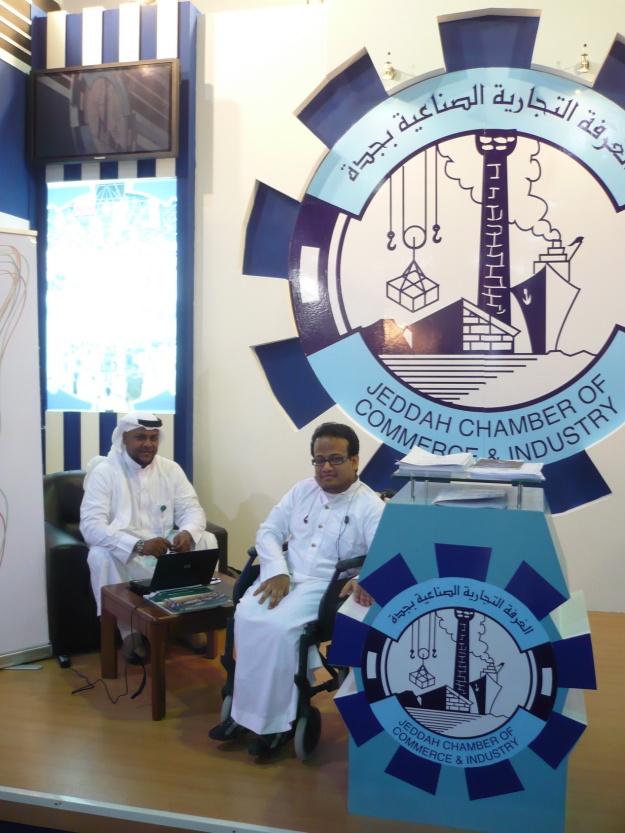