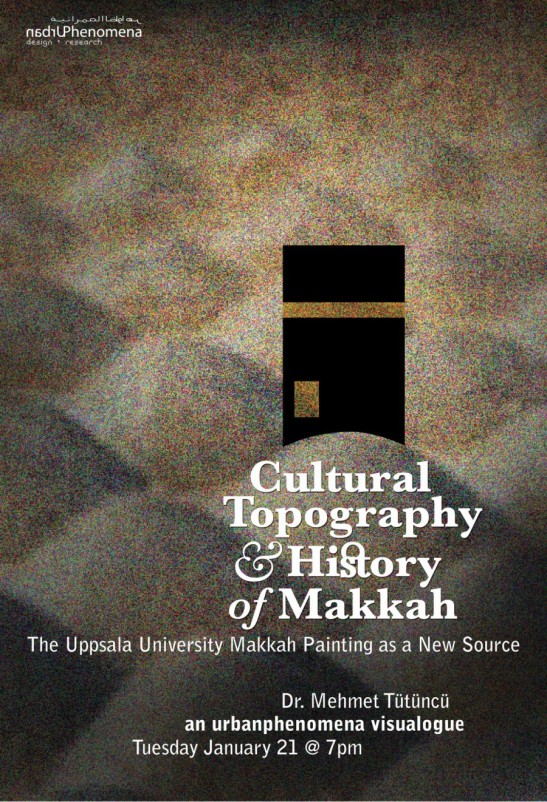 To continue our coverage of urbanism in the Holy Cities, and just as we started 2013 with a debate on the urban fabric of Al-Madinah, we shift our focus in January 2014 to Makkah. Currently undergoing massive re-writing of its urban form, to a degree never witnessed in all its history.

The Holy Cities of Makkah and al-Madinah have always been imprinted in the memories of Muslims for centuries. Even non-Muslim travellers and explorers made far reaching attempts to demystify the enigma of the Holy cities of Islam. Over the centuries, various modes of visual representations “recorded” a visual imprint of these two cities in the collective social memory.

One work that has recently garnered interest is the “Mecca Painting” from the University of Uppsala (Sweden). This large unusual painting shows a topographical view of Makkah with the Holy Mosque in the centre surrounded by the houses of the city and the hills of the Makkan neighborhood. The picture was acquired in 1710 by Swedish orientalist Michael Eneman (1676–1714), probably in Istanbul. It is assumed that the painting is a contemporary work because representations of Makkah and al-Madinah were common at that time. This painting was revolutionary because for the first time it made accessible a birds-eye view in drawing of Makkah and the Ka’bah. The painting contains also information about buildings that were destroyed later and only known from this piece. However, despite the great and essential importance of this, it has not received the interest that it surely earns. A detailed study of this drawing and its cultural and historical environment has still not been done.

Our speaker for the January 2014 edition of the visualogue is Dr. Mehmet Tütüncü, director of the Research Centre for Arabic and Turkish World in Haarlem, Netherlands. This centre researches the crossroads and sections between Turkish and Arabic world and especially the Ottoman empire’s Arab provinces. He is the editor of Turkish Islamic Inscriptions series of the research Centre. His current works focus on Ottomans in the Mediterranean (North Africa) and Arabian Peninsula as well as the Ottoman Heritage in the Holy Cities of Makkah and al-Madinah.

Some of Dr. Tütüncü works can be viewed and downloaded from the following link:

This entry was posted on January 21, 2014 by Majed Munshi in Visalogue and tagged Makkah, Urban, Urbanism, Visualogue.