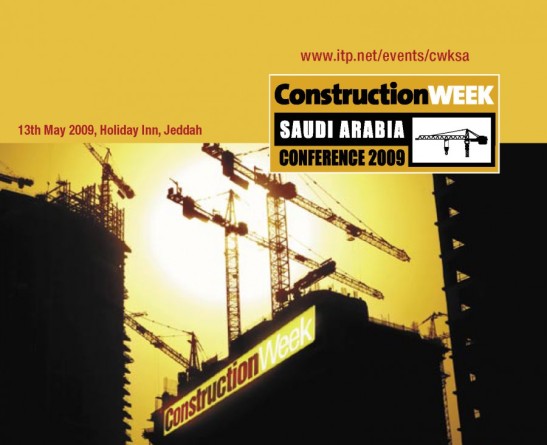 A Report from the Construction Week Saudi Arabia Conference

Initially scheduled for April 20 , the “Construction Week Saudi Arabia Conference” was held three weeks later at the Al-Salam Holiday Inn in downtown Jeddah.  Billed as “the first of its kind,” the one day “exclusive forum” was organized by Dubai-based Construction Week.  The program’s four main topics (Market Trend Forecast, Legal Overview, Adopting to the Saudi Requirements & Business Climate [sic], and Facilities Management) hinted at a particular audience: prospective foreign investors and expat architects, engineers and business managers in the construction field.  As expatriate-run businesses based in the Gulf move inland to Saudi Arabia, they realize that conditions and expectations in Saudi Arabia differ considerably from younger, more progressive GCC siblings.  The conference organizers had offered help in making some sense of new territory.

The delayed start wasn’t the only evidence that this event was the organizers’ first experience in the Kingdom.  It was also clear that the organizers had booked the venue online, without people on the ground to assess the choice of venue. The previously announced venue was conveniently located in Northern Jeddah (The Westin Hotel), a location more suitable for a development conference. Not just because of a better image, such a venue would have also better supported the organizers’ efforts in holding the event for the first time.  Consequently, many, including local participants and speakers, assumed the conference was at another, better known Holiday Inn, and arrived late, or simply did not show up at all.

Another concern for many of the participants was the continuously changing list of speakers. The initial list was certainly an enticement for those considering to attend, even for a prospective local audience, as it promised to present a much needed discussion on the impact of current strategies in the Kingdom.  Organizers announced an unprecedented round table discussion of government policies on real estate and infrastructure investment that would have included representatives from the Ministry of Planning, the Arriyadh Development Authority, and Jeddah Municipality.  Other announced participants included the Saudi Minister of Transport, the Minister of Petroleum & Mineral Resources, Sheikh Mohammed Bin Laden of Saudi Binladen Group, and Feizal Ali, CEO of MMC Group (the Malalysian company handling the set-up of Jizan Economic City).  The elusive Jizan Economic City and the KSA Railway project were also going to be reviewed.  Construction Week’s proposed cast of local and senior-level participants seemed part of a high-profile, government-supported event.

Instead, a rapid and continuous change of speakers and timing left a feeling of suspicion among attendees who had paid just under $1000 to attend the conference.  The event’s director, Oscar Wendel, did not show up because of the usual reason, visa complications.  Even the conference’s basic opening speech was cancelled: the conference chair, an executive of Burt Hill, was also sidelined by visa complications.  Another surprise was the last-minute withdrawal of the Dubai-based developer Limitless. A sign of the times, perhaps? The presentation on the firm’s mega-project in Riyadh, Al-Wasl, was highly anticipated by the attendees.

Event organizers had informed me during one of the breaks that they managed to secure the two local chairmen for the conference only one week before the conference.  Of the two, one continued until the end of the day, Dr. Khaled Al-Angari, CEO of Awnas. The second chairman apparently disappeared without word before the first coffee break.

Truth be told, a number of presentations provided informative statistics and updates on running projects. For example, the majority of Jeddah residents are unaware that the number of unplanned zones in Jeddah has reached fifty and house a third of the city’s population (1.2 million). This announcement was made in the opening presentation by Dr. AbdulGader Amir, vice president for the Jeddah Development and Urban Regeneration Company.

Most speakers were too diplomatic, if not shy, in addressing the more serious issues concerning business in KSA. The audience would have benefited from an update on the kingdom’s infrastructural development and a closer consideration of the differences between working in Saudi Arabia and the UAE, or any other GCC country.

Any conference could face such trouble. To add to that, most attendants, and especially the local community, are aware that conducting business in Saudi Arabia is not a straightforward path. No one would say it is easy, even local professionals have to handle a lot to achieve a little. However, it seems ironic that while the organizers promise to “unveil the vital components for successful engagement in Saudi construction,” they stumble miserably on the most expected troubles in organizing an event like this in Saudi Arabia.

For someone to claim to know the key to the code and want to tell you how to conduct business in a country that is not their own comes across first as comical and then presumptuous, if not misleading. To local participants it sounded as if some sort of redeemer had landed and would provide tried tricks or shortcuts on how to crack the code! On the contrary, local participants seemed to leave with their own message to the out-of-town-guests, one of sympathy and good luck: “I hope you know what you are doing!”

In the end, the Construction Week conference promised a lot, but failed to deliver the pivotal event that would kick start discussion and attention on projects in KSA to a global audience. The result was a watered down gathering of expat professionals already residing in the Kingdom (peppered with a couple of local speakers) who dispensed advice to new expats on how to get a piece of the KSA pie, without getting into trouble.

There was one piece of news that did create a much needed buzz amid the monotonous succession of presentations. That was the upcoming launch of the new Jeddah Strategic Plan scheduled for the following week. Announced by Dr. Amir, the plan will map out the city’s development until 1450/2028.  One might wonder if this piece of news was relevant to the event participants.  However, the manner in which it was delivered was reminiscent of the ‘Ulab Al-Milkah, the gift packages distributed at local Hejazi weddings to the groom’s guests. Has the conference introduced the Red Sea Bride (as locals refer to Jeddah) to its new suitors?  At least the guests walked happily away with their ‘Ulab gifts: while they may have been not completely happy with the results of the conference, then at least they had discovered that there is plenty of work to tender for.  We Jeddah residents can only wait and see.

This entry was posted on May 13, 2009 by Majed Munshi in Research, Social Media and tagged Architecture, Articles, Events, Report, Writings.