A Report from the latest CITYSCAPE Jeddah Exhibition

The latest event from the world renowned Cityscape portfolio of events was recently held in Jeddah, Saudi Arabia between 5-7 April 2015. Officially labelled “Jeddah Urban Development and Real Estate Investment Event” after being cancelled controversially two years ago due to legal issues with the Ministry of Commerce on the use of the “Cityscape” name for the marketing material, it is- according to this year’s marketing material- the largest real estate investment and development event in Saudi Arabia. Proving that they have sorted this mess out, Cityscape Jeddah 2015- we’re still not sure if this name can still be used!- was inaugurated by the governor of Jeddah Prince Misha’al Bin Majed.

Many large scale urban development projects are under construction in Jeddah and are gaining pace rapidly. The most significant are the publicly funded governmental projects such as the Haramain railway and station, the public transport project (Jeddah Metro & Bus Network), the seashore Corniche development, and several major crossings flyovers and street intersections developments (Jeddah Municipality). Several of these projects were exhibited at the event. In addition, there was quite a considerable number of residential projects by the private sector which were much more in number when compared to previous Cityscape events that took place in the Kingdom. 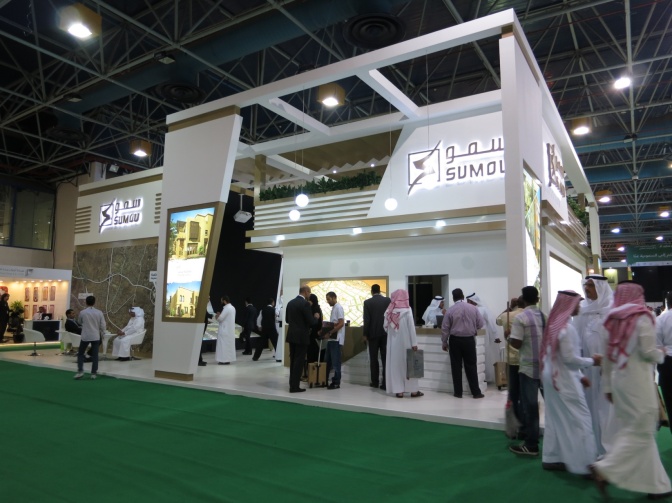 Saudi Developer SUMOU were exhibiting their largest project ever; Dhahiat Sumou located on the Makkah Expressway.

The leading exhibitors at the event were Sumou Holding Company, Ewaan Global Residential Company, and Dubai-based Sobha Hartland. They displayed the largest projects and were the top sponsors as well. However, most of these major developers and sponsors showcased older projects with slight expansions of new phases and stages, such as Alfareeda project by Ewaan, and Dhahiat Sumou & Tilal located on Makkah highway by Sumou. Apart from the Saudi companies, there were several developers from the UAE and Bahrain presenting their regional projects.

As is expected in such high profile events, many of the exhibitor’s stands and models were truly eye catching, and it was apparent that a lot of work was put in making them look appealing to visitors, a straight-forward yet essentially strong way of attracting buyers and investors.  Apart from the international and regional real estate investors & developers, many of those exhibiting were architecture & engineering firms, real estate brokers, local banks and major government authorities who have a major influence on the real estate market and the changes currently taking place of the Kingdom’s market regulations.

Ministry of Commerce and Industry booth.

We asked one of the exhibitors why they chose to participate in the Jeddah Cityscape and his reply was simply: “The market in Jeddah attracts more visitors interested in real estate than other cities”. In addition to that, Jeddah was the first host for the Cityscape event in Saudi Arabia. In general, we observed a decrease in the percentage of projects within the city of Jeddah. Developers may be anticipating real estate market trends following the newly approved government regulations to impose fees for un-built vacant plots of land- a major bit of news which was circulating- especially for those who own large tracts of land within the city boundaries. Moreover, recently established regulations imposed by the Ministry of Commerce for contracting and off-plan sales were enforced. Representatives of the Ministry were visibly active and made their presence felt during the Jeddah Cityscape 2015 event.

Emaar’s Booth with a Ministry placard announcing its closure.

Not even major marker player Emaar, considered one of the leading investment and real estate companies in the region, could escape their clutches. It seems that Emaar had violated these new rules from the early beginning, and as a result their exhibition stand was officially shut. A major setback-if not an embarrassment- for the company which spearheaded the recent boom in real estate in the Kingdom via the KAEC project, and became the most well-known in its field especially at Cityscape events during previous years.

These new regulations might lead interested companies to reconsider their development strategies in the near future. Under such volatile conditions, we can only wait and see what type of projects will unfurl in the city this year.