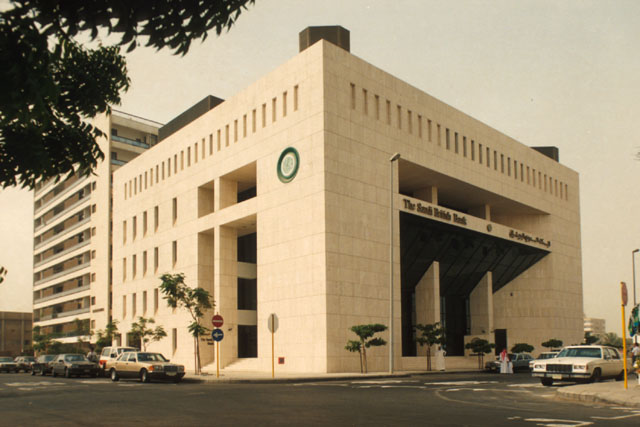 By the time the new Headquarters building for the Saudi British Bank (as it was then known, now re-incarnated as SABB) was completed, the British firm of Robert Matthew, Johnson-Marshall and Partners (RMJMP) had been already working in Saudi Arabia for almost 13 years. No doubt they have had a significant influence on the planning and subsequent urban morphology of the contemporary city of Jeddah, ever since they were retained to draw up an initial master plan of Jeddah in 1970. The Master Plan for Jeddah, which was prepared during the period between 1971-72 for a future 20 year period, was submitted and approved in 1973.  It could be said that the form and structure of Jeddah as it exists today is that of their 1973 Master Plan.

However, by 1984, the Jeddah office of RMJMP was wrapping up their work (they had been retained as “experts” to oversee the training program for Saudi planners and engineers within the Jeddah Municipality) and handing over their tasks to local consultants and the different departments of the Municipality which they helped set up.*

Naturally because of their long term involvement and the extensive network they have developed within the decision making community both in Jeddah and with the UK’s Foreign Office/International Trade Office, it was inevitable that senior management of Midland Bank (the British Partner at the time of the Saudi British Bank – later acquired by HSBC) would seek to commission them to build the main headquarter of their Saudi operations in Jeddah. 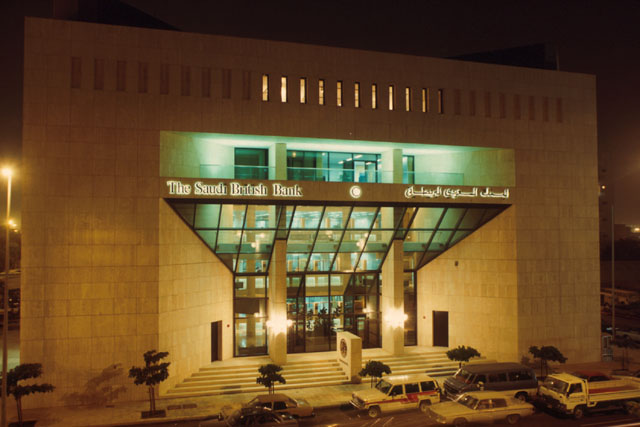 The main headquarter – at its time – of the Saudi Arabian British Bank stands on the north of an urban area of the historic city of Jeddah.

A five-story building with a cubic symmetrical mass expressing a prominent presence of the building in the surrounding context. Due to the harsh Climate of Saudi Arabia, small slotted windows were added with an extreme restriction of the use of glass. Although, a slanted welcoming glass entrance contrasts with the massive design of the building. 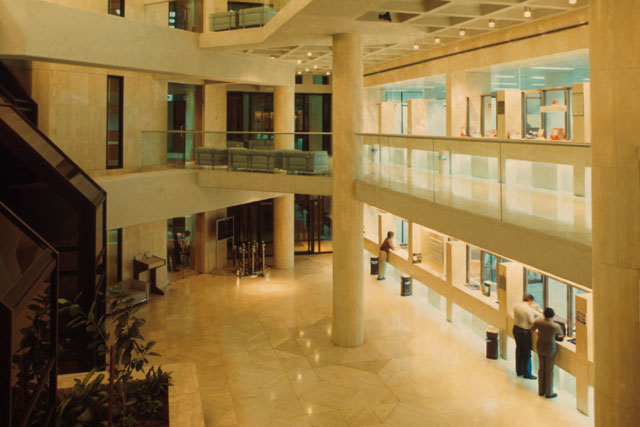 Furthermore, Exterior cladding in Travertine marble, the material of choice during that period, both for its ‘’earth-like’’ texture and its aesthetic qualities. The main foyer has a rich experience with a triple height, allows an overlook – transparency – between public and private spaces. The floor plan comprises banking facilities on three lower floors, administration on two upper floors and car parking accommodate two sub-levels. The structural system is cast-in-place concrete frame with block infill, exposed waffle-slab floors, and a steel frame roof.

The design no doubt is influenced by a stereo-typical architecture of arid land- a Pan-Middle-East sort of approach that works when plonked any where in the Gulf- albeit not indigenous to the Jeddah / Hejaz region. 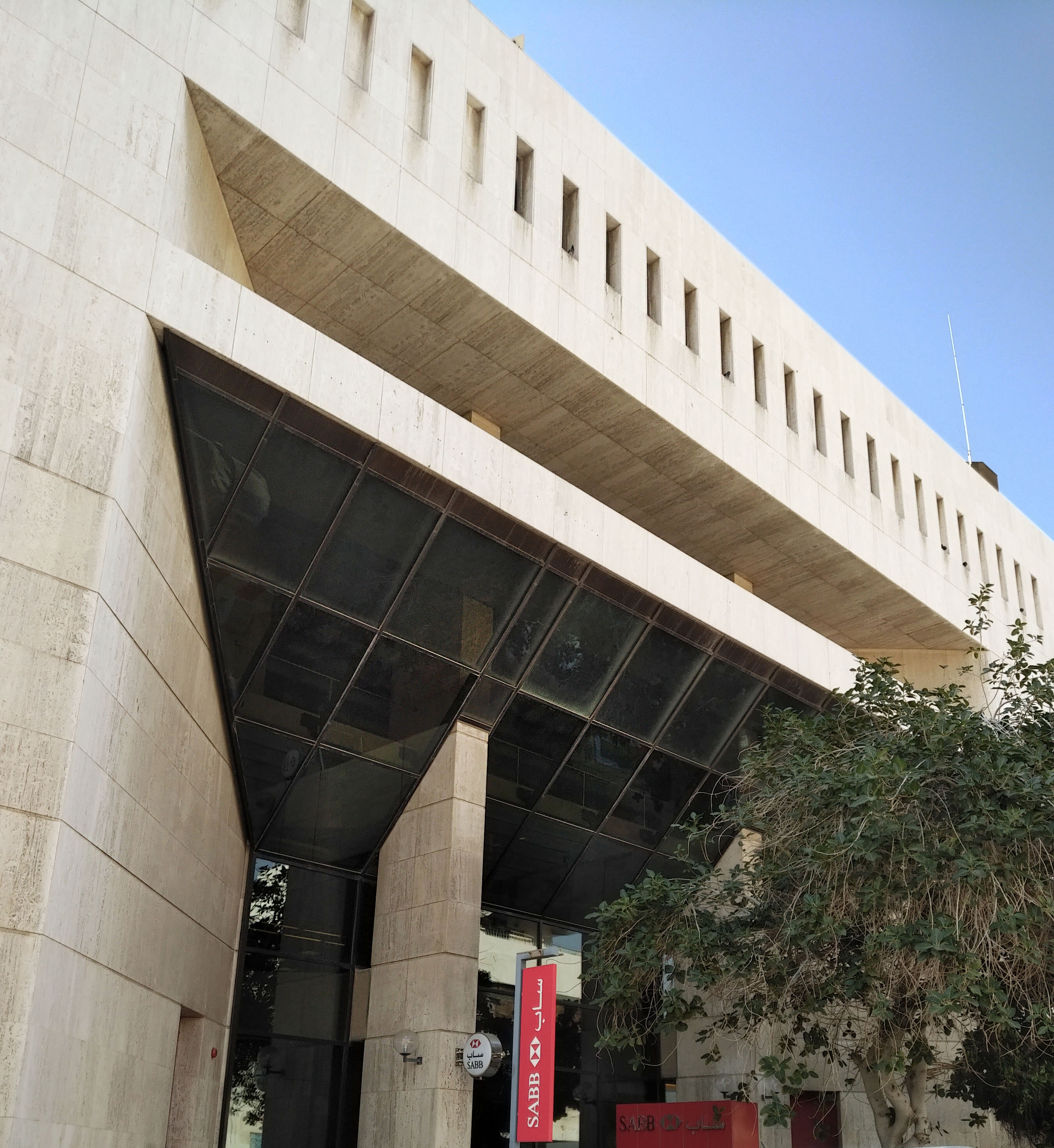 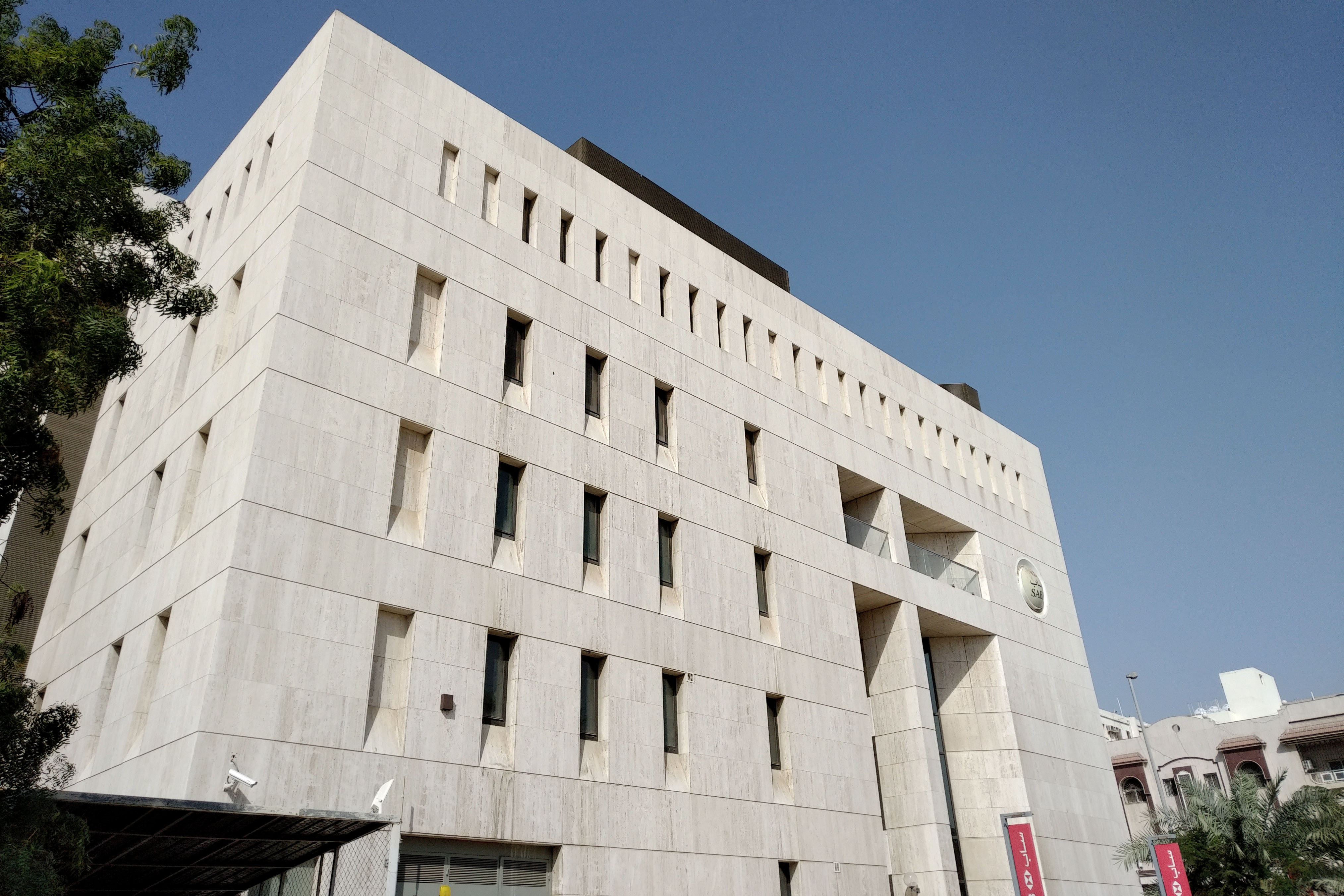 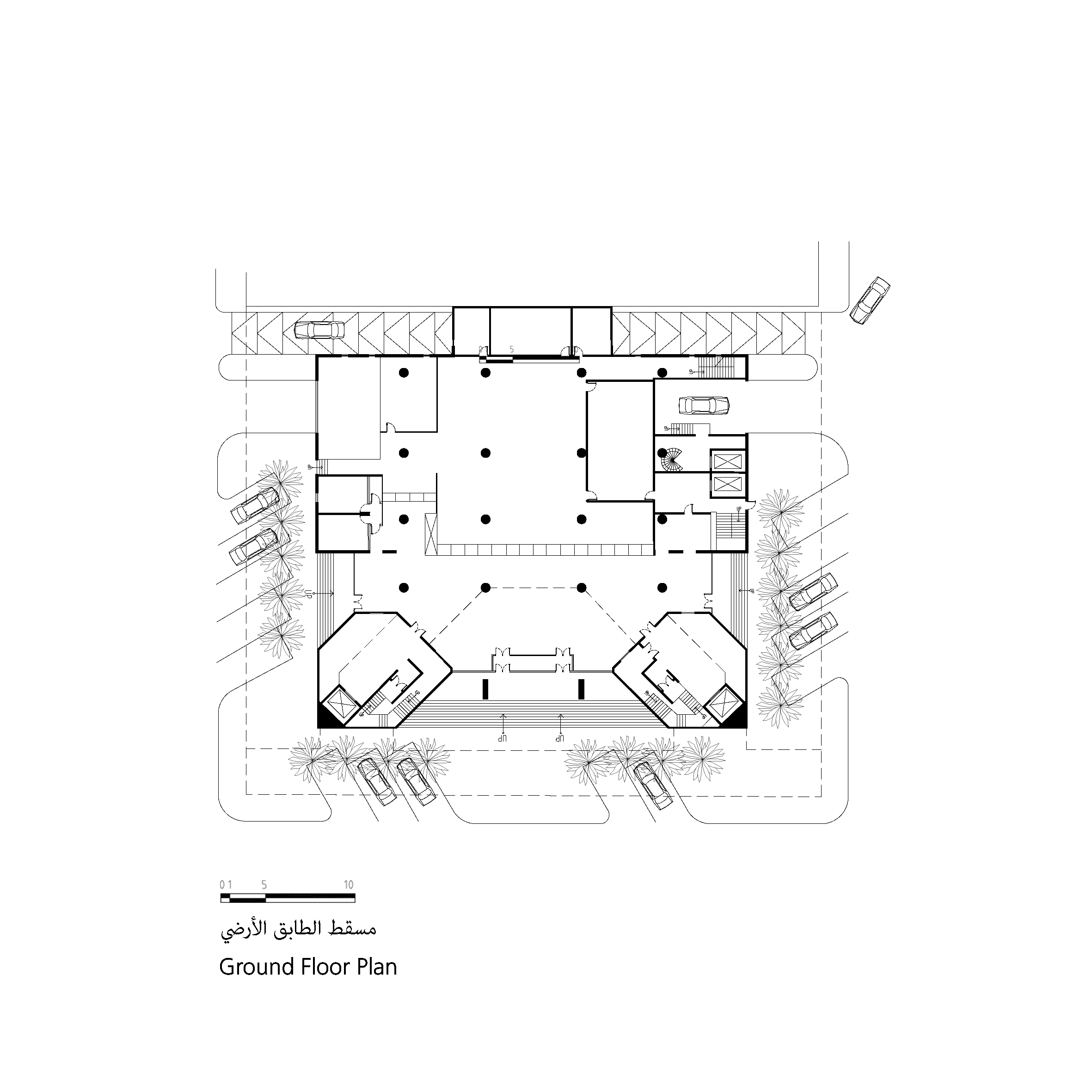 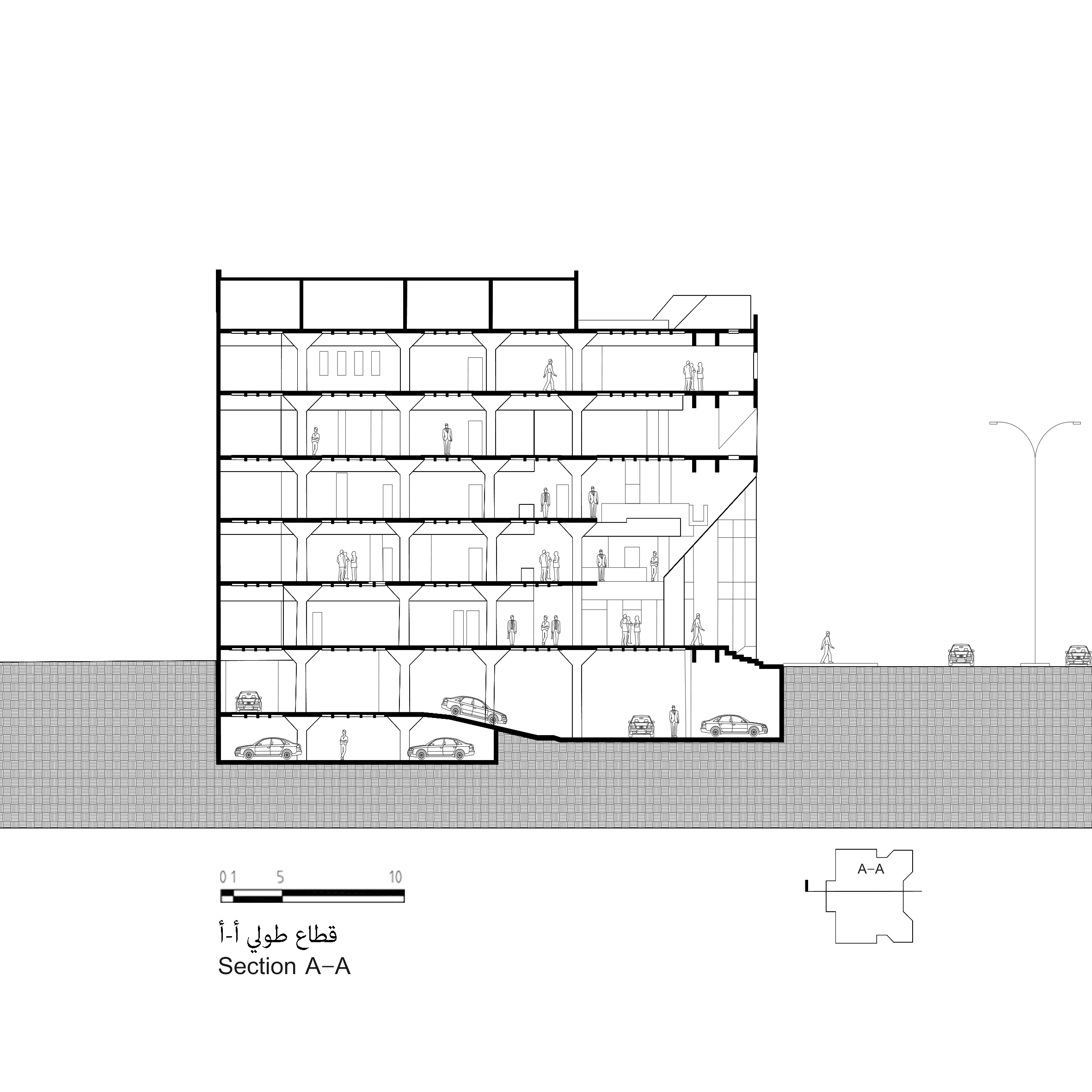 This entry was posted on September 5, 2019 by abdulrahmanaljohani in Jeddah Architectural Guide and tagged JAG, JeddahArchitecturalGuide, RMJM, Robert Mathews.